The report was presented at the final event of the European project EMPORIA4KT, in which 56 attendees from all over Europe participated. 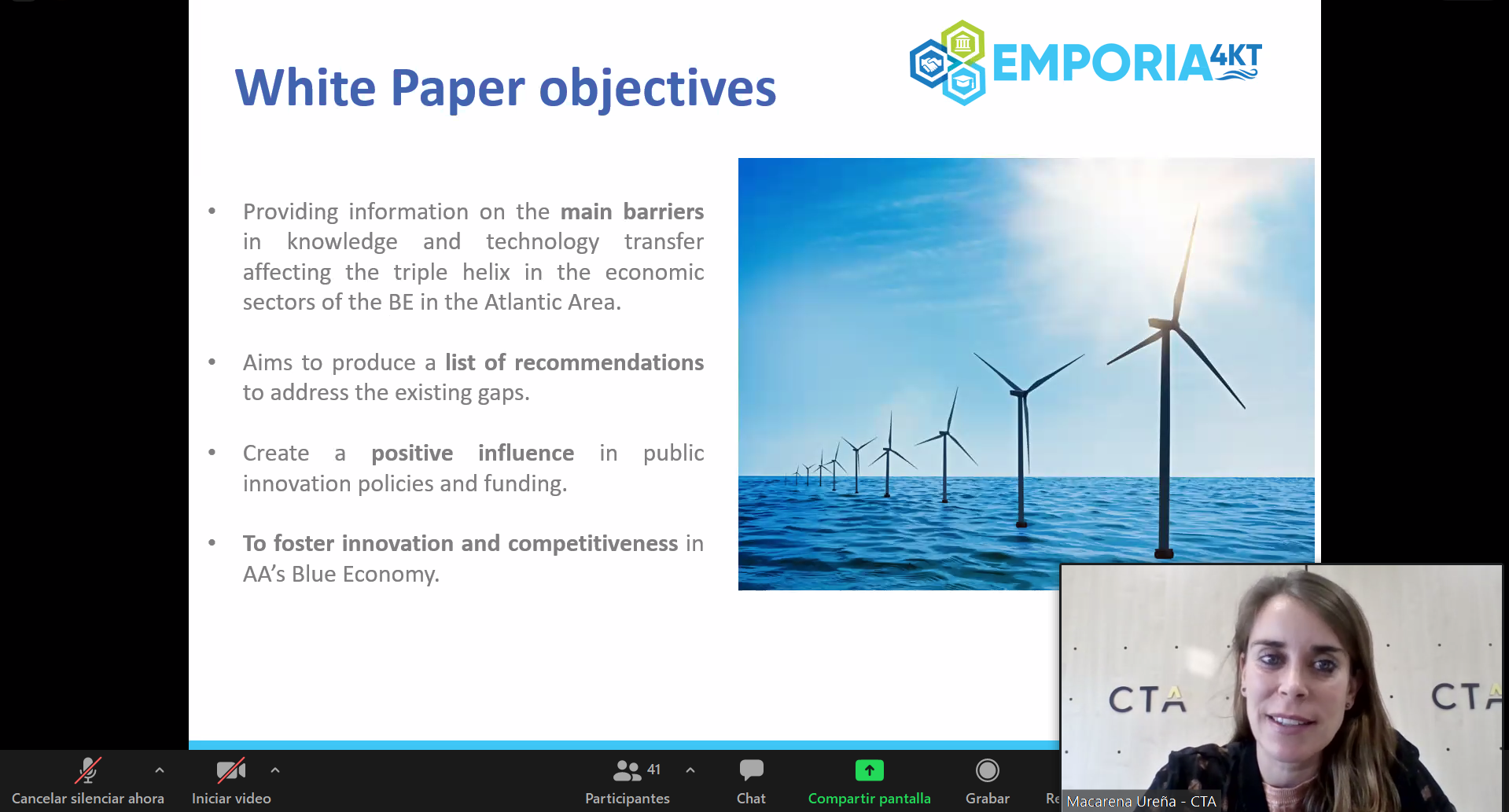 The CTA consultant Macarena Ureña has presented a white paper on public policy recommendations and financing mechanisms to promote knowledge transfer in the blue economy sectors. The report was presented at the final event of the European project EMPORIA4KT, held online on January 25th and in which 56 attendees from all over Europe participated.

The blue economy encompasses all economic activities related to oceans, seas and coastal areas and includes industries such as fishing, shipbuilding, tourism and ocean energy. Currently, it employs nearly 3.5 million people in the European Union (EU). The objective of the report is to identify the main barriers to the knowledge and technology transfer in the blue economy sectors of the Atlantic area (Spain, Portugal, France, the UK and Ireland) and to propose recommendations to overcome them. In addition, the report aims to create a positive influence on European public policies and promote innovation and competitiveness in these sectors.

This study, in which CTA consultants Juan Carlos Moreno and Carmen Girón have also participated, has been based on an analysis of the state of the art and the results of five national and one international bootcamps with experts, carried out by EMPORIA4KT.

The report highlights the need to create stable and sustained relationships between the research community and industrial stakeholders, with the aim of creating a scenario in which both academia and industry can benefit. In addition, it highlights other key elements such as the implementation of public policies to finance R&D from early stages, the involvement of the private sector and the application of open innovation tools, among others, to promote knowledge transfer.

End of the Technology Transfer Programme

The event marked the closure of the EMPORIA4KT Technology Transfer Programme, after the presentation of five technologies by young researchers who have been mentored within the framework of the project to design commercialization routes and transfer early technologies from the blue economy sector to the market . The technical director of CTA, Fabián Varas, has participated as a jury to choose the best project.

The EMPORIA4KT transfer programme addressed the need to support young researchers in developing their skills in technology transfer and innovation, in order to contribute to the development of a sustainable blue economy in Europe. In total, the project has trained 60 European researchers.

EMPORIA4KT is funded by the Interreg Atlantic Area Programme with the aim of promoting University-Administration-Business knowledge transfer, to boost the blue economy. Andalusia has participated in this ambitious project through CTA, CENTA and CEIMAR.